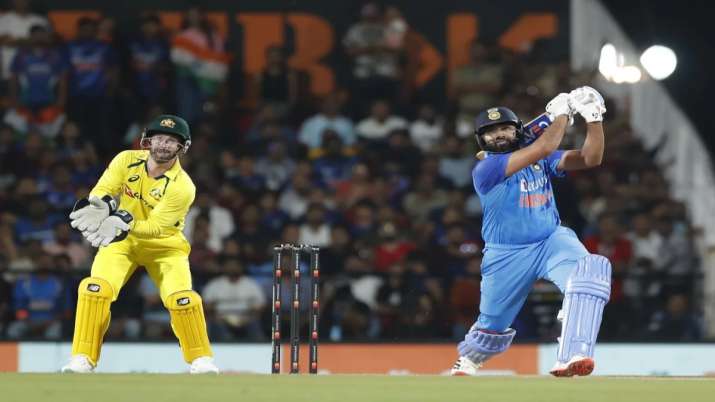 Rohit Sharma IND vs AUS: Rohit Sharma batted vigorously in the second match of the three-match T20 series between India and Australia at the VCA Stadium in Nagpur. The Indian captain scored an unbeaten 46 off 20 balls in this match and gave India a six-wicket win. The Indian captain also hit four sixes with four fours during his innings and made a new record in T20 Internationals.

Indian captain Rohit Sharma, after winning the toss, took to the field to chase down the target of 91 runs in the eight-over match. When he came to the crease, he was very close to making a special record. He became the Sixer King in the second match of the series against Australia. Hitman needed to hit just one six to become the batsman with the most sixes in T20 International cricket. He completed this task in the first over itself. He easily holds the world record for most sixes in T20 Internationals.

Earlier, the record of hitting most sixes in T20 International was held by New Zealand opener Martin Guptill. Guptill has hit 172 sixes in 117 innings of 121 matches. At the same time, Rohit Sharma has now overtaken Guptill by hitting 176 sixes in 123 innings of 138 matches.

Rohit is yet to play seven more international matches before leaving for the T20 World Cup. After Nagpur, one more match against Australia and three T20 and three ODI matches against South Africa. In these six matches, Rohit has a chance to achieve another achievement related to sixes. If Rohit hits 10 more sixes in this series, then he will become the second cricketer in the world to hit 500 sixes in international cricket. So far only Chris Gayle has hit more than 500 sixes. Rohit has so far hit 490 sixes in 416 matches in international cricket and is second in terms of hitting most sixes. While the Caribbean stalwart Chris Gayle tops this list with 553 sixes in 483 matches.