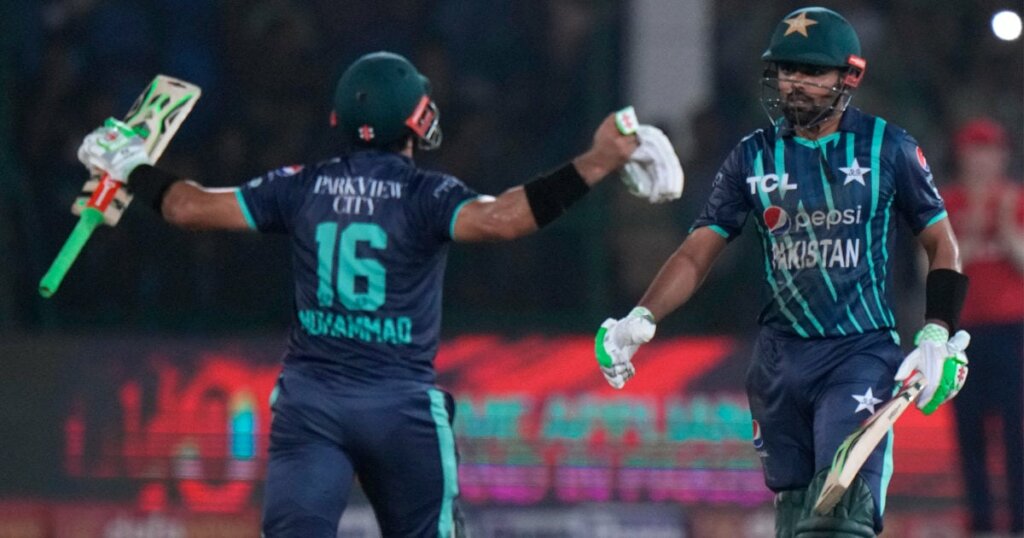 Karachi. Babar Azam and Mohammad Rizwan were both criticized during the T20 Asia Cup. It was being said that both bat slow. Now both the veterans have given a befitting reply to this. In the second T20 against England (PAK vs END), both of them shared an unbeaten partnership of 203 runs to give Pakistan a big win by 10 wickets. In this way, the series of 7 matches has become level by 1-1. Playing first in the match, the English team had scored a good score of 199 runs. In reply, Pakistan achieved the target in 19.3 overs without a wicket. Babar Azam remained unbeaten on 110.

Babar Azam and Mohammad Rizwan shared a partnership of 203 runs. In T20 International, both of them added more than 150 runs for the 5th time. No other pair has been able to do this more than 2 times. Babar remained unbeaten on 110 off 66 balls. Hit 11 fours and 5 sixes. The strike rate was 167. At the same time, Rizwan was not out after scoring 88 runs off 51 balls. The strike rate was 173. In the overall T20, Babar and Rizwan left behind the pair of Virat Kohli and AB de Villiers. Both have shared a partnership of more than 150 runs 4 times.

First win without a wicket
Talking about T20 International cricket, for the first time a team has achieved the target of 200 or more runs without falling wickets. Rizwan and Babar have so far added 1929 runs in 36 innings at an average of 57 in T20 Internationals. After 7 centuries and 6 half-century partnerships. No one has been able to score more runs as a pair than them. He left behind Rohit Sharma and Shikhar Dhawan. Both had added 1743 runs in 52 innings at an average of 34. Had a partnership of four centuries and half-centuries 7 times.

Babar Azam became Bahubali, together he made 1, 2, 3, 4, 5… Not many records, Kohli-Inzamam left behind

7 times century partnership
Babar Azam and Mohammad Rizwan have made a century partnership for the 7th time in T20 Internationals. This is also a record. No other pair has been able to do this more than 5 times. Rohit Sharma and KL Rahul have done this 5 times. Pakistan has won by 10 wickets for the second time in T20 Internationals. In the T20 World Cup last year, he also defeated India by 10 wickets. England, on the other hand, lost for the first time by 10 wickets.