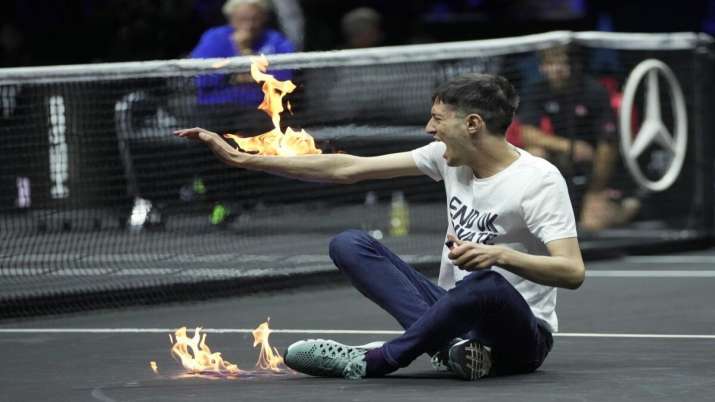 Laver Cup: The big players of tennis are currently facing each other in the famous Laver Cup tournament in London. In this tournament, the great tennis player Roger Federer will also be seen on the court for the last time. Even before the end of Federer’s long career, a shocking incident happened in the Laver Cup. In fact, during a Laver Cup match, a protester entered the court by setting fire to his hand. Due to this incident, there was a ruckus in the Laver Cup and that match was stopped for a while.

In fact, a Laver Cup match was being played between Europe team player Stefanos Tsitsipas of Greece and Team World Cup player Diego Schwartzman of Argentina, when there was a demonstration in London’s No. 2 Arena to protest the use of private jets in Britain. The man ran to the court. The young man had set fire to his hand. Then the Laver Cup match between Stefanos Tsitsipas and Diego Schwartzman was put on hold for some time. The man was quickly thrown out of the court by the security personnel before things got worse.

Because of this big action

British media reported that the demonstrator was a member of the End UK Private Jets group, which it claims is “carbon emissions genocide in 2022”. Tsitsipas, the 2021 French Open runner-up, later said, “It’s never happened before… It’s never happened to me on the court. I hope he’s okay.” In a statement, the organizers of the Laver Cup said the protester has been arrested and the police are dealing with the situation.

Europe team is going ahead

In the opening match of the Laver Cup, Casper Roode defeated Jack Sock 6-4, 5-7, 10-7 to give Europe the lead. On the other hand, Tsitsipas won the match 6-2, 6-1 to give Europe a 2-0 lead. Swiss great Roger Federer is set to take to the court later in the day for the final match of his career, in which the 41-year-old will face the American pair of Sock and Frances Tiafoe alongside his great rival Rafael Nadal.

More than 1500 matches and 20 Grand Slams, such was Federer’s career

The achievements of Roger Federer are evident. The Swiss star decided to retire at the age of 41 but what he has done in the last 24 years has been incredible. He played more than 1500 (1526) matches in a career spanning 24 years. He also holds a record of winning 369 Grand Slam singles matches along with 20 Grand Slam titles. He won 8 Wimbledon, 6 Australian Open, 5 US Open and 1 French Open titles. His golden career is about to end and he will be seen for the last time in the Laver Cup.